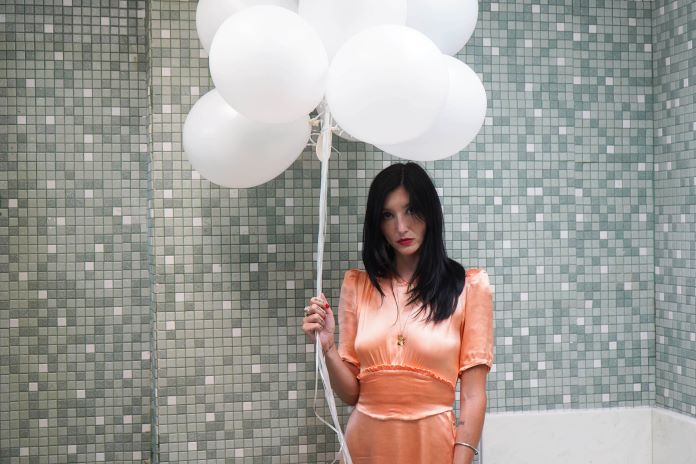 Premiere: Queen Kwong Shares New Single “Without You, Whatever”

New Album Couples Only Is Out July 12th via Sonic Ritual

This summer, singer/songwriter Queen Kwong (a.k.a. Carré Kwong Callaway), is back with her visceral new album, Couples Only. Though the record could be called a divorce record, it is more accurately a discordant and cathartic retelling of one of Callaway’s darkest periods, exploring the aftermath of Callaway’s diagnosis with Cystic Fibrosis and her subsequent divorce. On the record, Callaway is joined by a coterie of contributing musicians, including The Cure’s Roger O’Donnell, Swans’ Kristof Hahn, and Blood Red Shoes’ Laura-Mary Carter.

Earlier this year, Callaway shared her first singles from the record, “I Know Who You Are” and “On The Run,” and today she’s back with another new single, “Without You, Whatever,” premiering with Under the Radar.

With “Without You, Whatever,” Callaway breaks away from the stately arrangements and dark instrumentals of her previous two singles, and instead crafts a shimmering indie pop gem. Callaway’s crystalline vocals and chilly synths give the track the shape of a glittery pop tune, yet she also injects the dreamy soundscapes with spiking shots of barbed guitars and bitter lyricism. With these jagged edges, Callaway transforms a moment of longing into one of affirmation and power, assuring herself that she is better off alone than with someone who hurt her.

Callaway explains, “‘Without You, Whatever’ is the one and only pop song I’ve ever written —my version of pop, that is. Initially, it wasn’t even going to be on the record. When I wrote/recorded it, I was just trying to entertain Joe [Cardamone – producer] by singing in falsetto and trying to imitate Bowie. When I sent the folder of tracks to Tchad Blake [who mixed the album] I said “oh, don’t bother mixing ‘Without You, Whatever’ because I’m not going to release it,” and Tchad basically said, “WTF? That’s your single!” So he mixed it and I added it to the record at the last minute. It’s nearly impossible for me to sing because it’s so high and out of my range, but I like that it’s extremely different from anything I’ve ever released. The meaning behind the track is pretty simple. It’s about how you can miss someone even if you don’t want that person back because you know he/she was a complete waste of your time. Like, ‘losing you sucked but you sucked anyway so, whatever.’”

Check out the song below and pre-save the single here. Couples Only is out July 12th via Sonic Ritual.

You can download Premiere: Queen Kwong Shares New Single “Without You, Whatever”. You can also see interesting things about Kim of Queens A Mother of a Challenge Season 2 Episode 9 Full Episode Lifetime
View Detail

Love Kim of Queens? Stay up to date on all of your favorite Lifetime shows at mylifetime.com/schedule.

Kim prescribes pageantry for a bickering mother/daughter pair and Allysin takes charge as the girls enter a “Glitz” pageant in Season 2, Episode 9, "A Mother of a Challenge". #KimOfQueens
Subscribe for more from Kim of Queens and other great Lifetime shows:
mylt.tv/subscribe

Find out more about the show on our site:
mylifetime.com/shows/kim-of-queens

Lifetime® is a premier female-focused entertainment destination dedicated to providing viewers with a diverse selection of critically acclaimed and award-winning original movies, scripted dramas, and unscripted programming. A favorite and trusted network for women, we are continually building on our heritage by attracting top Hollywood talent and producing shows that are modern, sexy, exciting, daring, and provocative. Visit us at myLifetime.com for more info.